I have been playing with Azure Logic Apps on my own lately, and was wondering how these can be managed by teams in an enterprise environment, especially how can we automate the provisioning and deployment of Logic Apps.
In this post I will show how we can do this using infrastructure as code using Bicep.

Presentation of the context

As an example we are going to build a very simple project consisting in the following elements:

The following diagram shows what we are going to create here

I have prepared a GitHub repository to let you see the whole code of the demo, and eventually run it by yourself.
The repo contains the full IaC code in Bicep and Terraform, in the post I will show the most relevant parts in Bicep only for clarity reasons (and also because it’s all little bit more complicated in Terraform, more on this later).

Creating the base resources

To get started we are going to create all the resources but the Logic App itself. If you’re not familiar with Bicep this will help to understand the rest of the code, otherwise you can jump to the next section.
Note that my naming convention is composed of the same suffix in all resources names (with a random part to ensure the unicity of the name), and a prefix depending on the resource type.

To interact with a resource or a service, a Logic App requires an API connection, which is basically a wrapper around an API, the Azure table storage API in our case.
This is one of the key steps of this post, as the service connection contains the way the Logic App authenticates to the Storage Account. I could have used an account key but decided to use a managed identity to follow best practices (this post helped me a lot to make this part work).

Long story short, the trick with the Managed Identity is to use the 2018-07-01-preview API version of the Microsoft.Web/connections resource type. Bicep will show a warning because of this but it’s currently the only way to make it work:

Why are Logic Apps different ?

Before jumping into some more IaC code, let’s talk about how teams could manage (develop, version and deploy) Logic Apps and why they are different from other Azure resources like Web Apps or Azure Functions.
Functions and Web Apps are code-first services whose deployment require two steps:

Basically an empty shell is created, and then content is sent into the shell. Both steps can be achieved by different teams using different technologies.
Also deploying a new version of the business code does not reflect any change on the infrastructure.

Logic apps is a design-first service, typically you design your workflow in a GUI (like the Azure portal), and it is saved in a JSON “code” tied to the Azure resource.
So there is not the same separation between provisioning and deployment as above: any change to the business logic will be reflected on the infrastructure.
In other words, the “code” or the “logic” of the Logic Apps cannot be deployed separately from the creation of the resource itself.

So how can we develop Logic Apps from the GUI and automate their deployment using IaC ?
Here is what I’ve got in the Azure portal once I’ve finished “developing” my Logic App: 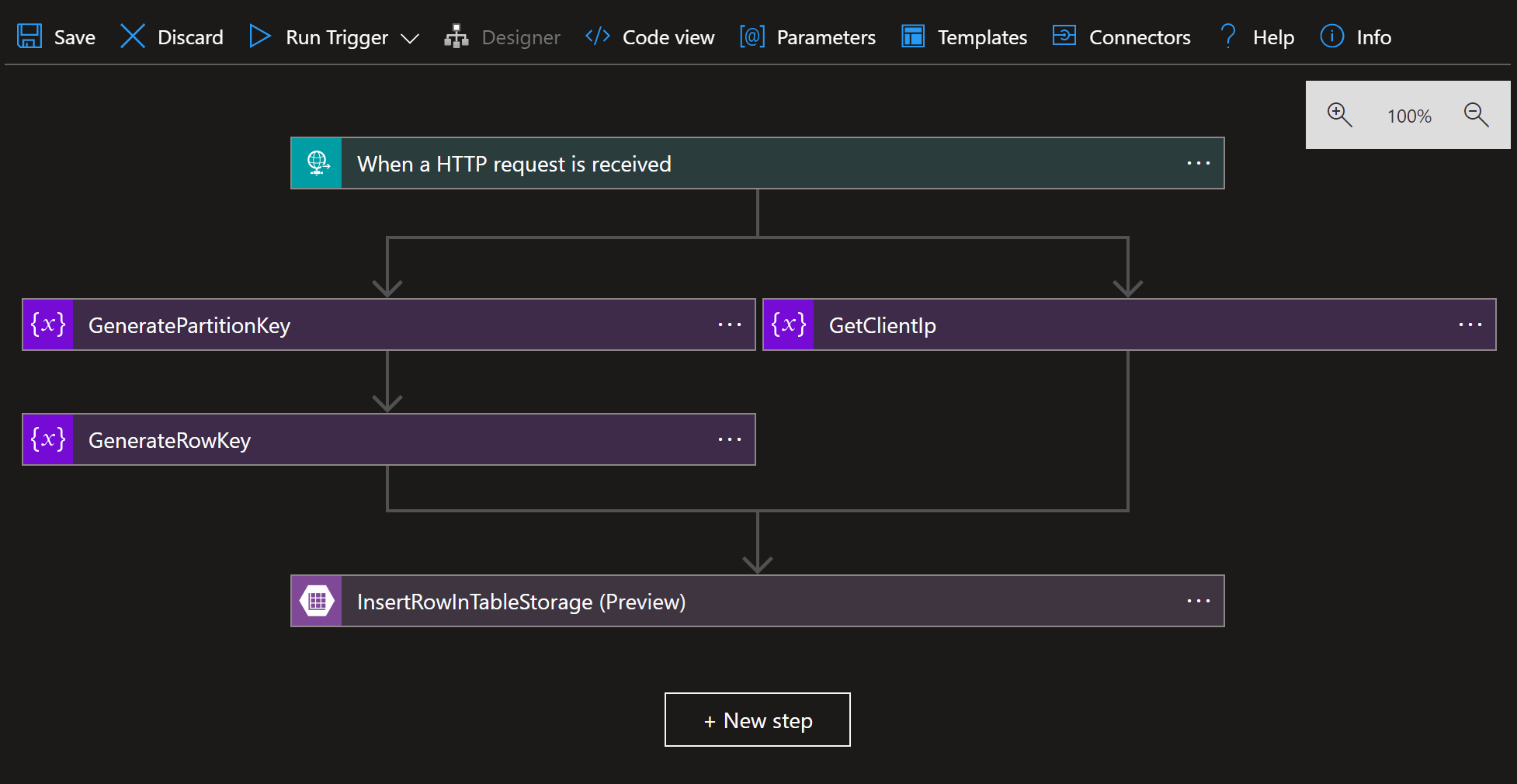 A similar experience is available using the VS Code extension
Switching to the Code view allows me to see my workflow in JSON. From there I can copy the definition element and save its content a file in my repo.

Why not taking all the content of the code view ? Because the parameters element contains the resource id of the API connection (with the subscription id and resource group name) and the Storage Account name, and I don’t want these kind of environment-related information to end up in my git repository.

Now that my logic is saved (and versioned) alongside my IaC code, I can use it in the definition property of my Logic App workflow (using the loadJsonContent builtin function):

The only thing left to do is to grant the Logic App access to the Storage Account using an assignment to the Storage Table Data Contributor builtin role. This can be seen here in the repository.

Finally everything can be deployed using a simple az deployment sub create command.

As mentioned earlier, this little demo project has been done in Bicep and Terraform, but I ended up keeping only the Bicep version in the blog post. This is for clarity reasons but also because doing this with Terraform has the following drawbacks:

This post shows a way to achieve a first step in managing Logic Apps at scale.
There are still many things to cover such as how to run the deployments in a pipeline, how to make a change and bring it from development to production, how to allow changes using the GUI only in development and force the use of pipelines in other environments, etc.
I hope this post will help you to bring your Logic Apps to the next level, do not hesitate to reach out if you need, and thanks for reading 🤓

Use Terraform Cloud for your pet projects

Over the last few years I have been interested by IaC (Infrastructure as Code), and started recently to use Terraform in my professional life. To keep practicing my Terraform skills I also started ...

We all love starting pet projects, so we tend to buy custom domains as it can be fairly cheap. SSL/TLS certificates on the other hand used to be pricey, but today there are several solutions to get...

TLS with Terraform and Azure: get certificates from Let's Encrypt

Following my previous post on generating self-signed certificates with Terraform, this one is the second post of the series. This time we are going to use Let’s Encrypt as the certificate authority...

TLS with Terraform and Azure: use managed certificates